Paul Hafner, an ex-officer in the Waffen-SS living in Spain, draws us into an obscure, grotesque world, until now inaccessible to most people …

HAFNER, a former pig-breeder, ruined inventor, playboy and above all an ex-officer in the SS, lives in Spain surrounded by Nazi friends and dreaming of the advent of the Fourth Reich. Proud and unapologetic, he introduces us into his obscure, grotesque world, made to his measure and which he haughtily rules. Finally however reality catches up with him. 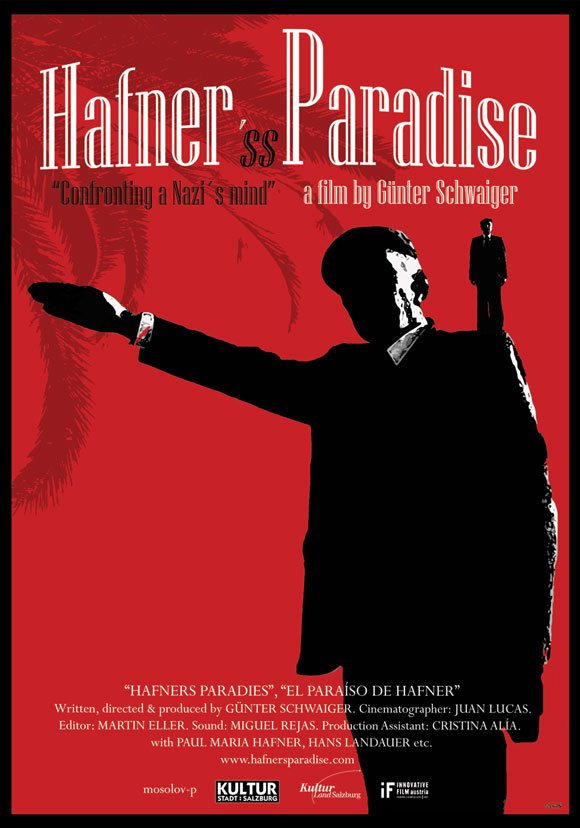 With:
Paul Maria Hafner y…
Hans Landauer –prisoner in Dachau concentration camp (1941 – 1945), ex-member of the International Brigades in the Spanish Civil War
Joachim Heyroth – former member of the Nazi Party, ex-combatant in the Condor Legion
Cristina de Rueda – daughter of a General during the Franco dictatorship

HAFNER’S PARADISE is a journey through the hidden world of Nazis in Spain, culminating with a historic confrontation between victim and executioner.

Little has been heard until now from the perpetrators and accomplices of the greatest barbarity in man’s history – the Holocaust. Only on very few occasions has it been possible to enter that world, so closed and rejected. This film is a fresh proposal, revealing the life and thinking of a former officer of the feared Waffen-SS who, even today, appears to inhabit the realm of Himmler and Hitler, aground in a past going back 60 years.

Paul María Hafner, theprotagonist, found in Spain, where he lives very comfortably, under Franco (and indeed in democracy),  reliable protection from the scrutiny of international justice. Although he did complete a sentence following the war and has no reckonings pending in any Court, he is in close contact with people who are indeed wanted or have been convicted in other countries because of their anti-Semitic actions and declarations, or because they have denied the existence of the Holocaust. He was also a friend of the war criminal León Degrelle.

As the film progresses, Hafner draws us into his dark and grotesque world, not devoid of humour and irony until, at its crucial point, he comes face-to-face with the well known ex-member of the International Brigades Hans Landauer, a survivor from the Dachau concentration camp. Both were there on 20 April 1945, Hitler’s birthday – Hafner as SS officer and Landauer as prisoner …

It is indeed fascinating to discover the inner world of a Nazi, revealing as it does so much of the depths to which man can descend.

But access is not easy. I spent many months reading, studying, interviewing and, step-by-step, coming closer to this place, so closed and hostile to anyone not attuned to its ideas. Eventually, after talking to many people, and creating a degree of personal trust, I was introduced to Paul María Hafner, who immediately became the lead player in this film.

However, “Hafner’s Paradise” is not just a psychological portrait  of an extremist; it also makes clear the close relation between Franco’s Spain and the Third Reich, particularly after the Second World War, when Spain gave refuge to so many Nazis on the run. 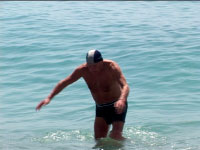 Paul María Hafner is neither a Martian nor a diabolical being, but an apparently respectable gentleman living in a smart Madrid neighbourhood who, aged 84, might be taken for a congenial grandfather, filled with goodness and affection. Paradoxically, that view is not completely mistaken. Hafner shakes hands and smiles at you, fully aware of his aura of charm and grace. Like anyone, he speaks of good and bad, he plays chess, swims 600 metres every day, and when he goes shopping, you feel like offering to carry his bags home.

Human beings are tremendously complex and chameleonic. We know how a concentration camp guard was capable of kissing children in the morning and then beating a prisoner to death in the afternoon. It was all a matter of “perspective.”

But how can this be? How can such conflicting feelings coexist in a single being? What are the moral values underlying such contradictions? What was that youth like, that so fervently gave itself up to Hitler? How did they think and how did they act? What was the effect on them of that brainwashing, and how do they confront the reality of their acts from today’s perspective? 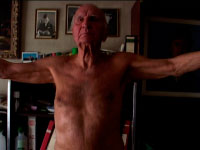 As a young man, Hafner entered the SS enthusiastically, totally convinced that it was an elite body representing the best of humankind. He fought in the Second World War, during which he was promoted to officer. Thanks to his commitment, he was chosen along with other youths for training at the elite SS schools. At the end of the war, he was sent to various concentration camps of which however he recalls “very little”, determinedly refuting the terrible crimes committed there.

The defeat of the Third Reich was an enormous trauma for Hafner, from which he has not yet recovered. His convictions have simply become firmer. He is not troubled by the accounts of the victims, or that National Socialism led the world to disaster. His fanaticism remains just as intact today as 60 years ago. He was aided in this by the fact that, under Franco, he did not have to hide, or repudiate his ideas. That is why Hafner considers Franco’s Spain “paradise on earth”. 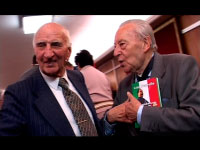 Rarely in history have idolatry, fanaticism and irrationality caused so much damage to so many people as National Socialism.

Thousands of testimonies of victims have left a clear, real image of the Holocaust and the brutal Nazi machine. Yet there is very little material which analyses the psychology of the executioners. Gitta Sereny and Claude Lanzmann have done so, although their impressive work focuses more on the figure of the repentant Nazi.

Pero Hafner repents nothing. He is the same today as 60 years ago, giving an onlooker the feeling of a trip through time, and facing a youthful SS officer, in the Spring of 1945.

So the question is: why is Hafner speaking out now, when most of his “comrades” who are still alive refuse to do so?

On the one hand, Hafner is unquestionably highly narcissistic. He enjoys being the centre of attention and playing the role of hero as several of his friends are pursued by the law.

On the other hand, I believe that now, as he reaches the end of his life, there is something inside him that wants to get out, something that drives him to speak, even if only to record his convictions and memories. It is impossible to know whether this conceals a repressed guilty conscience, or a desire to settle scores, but in any event his decision affords a unique occasion to peer into a worldview which is as obscure as it is chilling, as grotesque as it is latent in so many men.

The documentary is not staged in interviews but rather draws on the protagonist’s daily round. Hafner invites us to accompany him at all times – from when he gets up and brushes his false teeth, to where he meets with his Nazi friends. He swims, sings, strips off, works out, writes, reads and brags …

Although the research for the film lasted more than a year, during which time I talked to nearly all the historians and journalists who have dealt with the subject of Nazis in Spain, it does not use more archive material than was generated by the shooting itself. The only photos to appear are those shown by Hafner or some other character, or documents, footage or recordings produced and offered by the protagonists or the circumstances.

This creates the sensation of a record which draws just on what the film alone engenders, making no intent to manipulate but rather to portray with sensitivity a cruel reality which, whether we like it or not, forms a part of man’s being.

I have seen this film at once as a challenge and as a duel.

A Challenge because it has confronted me with the forlorn past of my own origins, with the dark history of my homeland, Austria. I was however able to do that from the more distant and fresh standpoint of my new life in Spain, where I have lived for ten years.

And a Duel because it is deeply difficult to confront someone who despises what I most value. Conversation with and even sometimes a feeling of liking for someone who has no compassion for the pain of others becomes unbearable. Hafner knew it, and toyed with it. He sought to undermine my will to resist throughout the filming but, ultimately, his silence says it all … 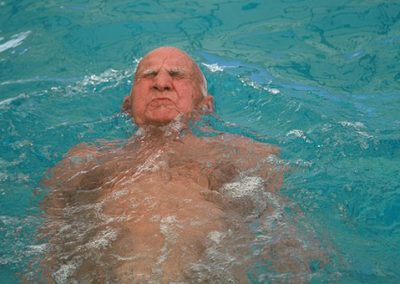 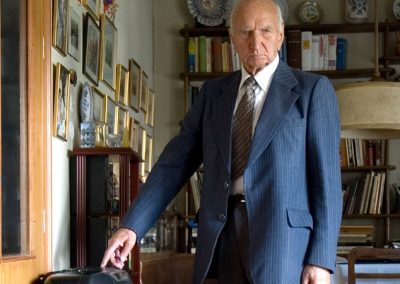 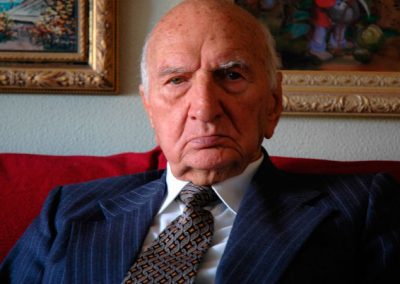 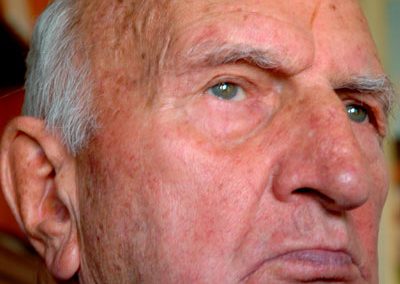 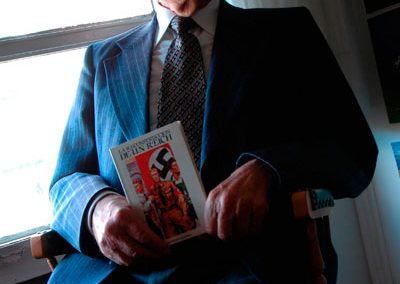